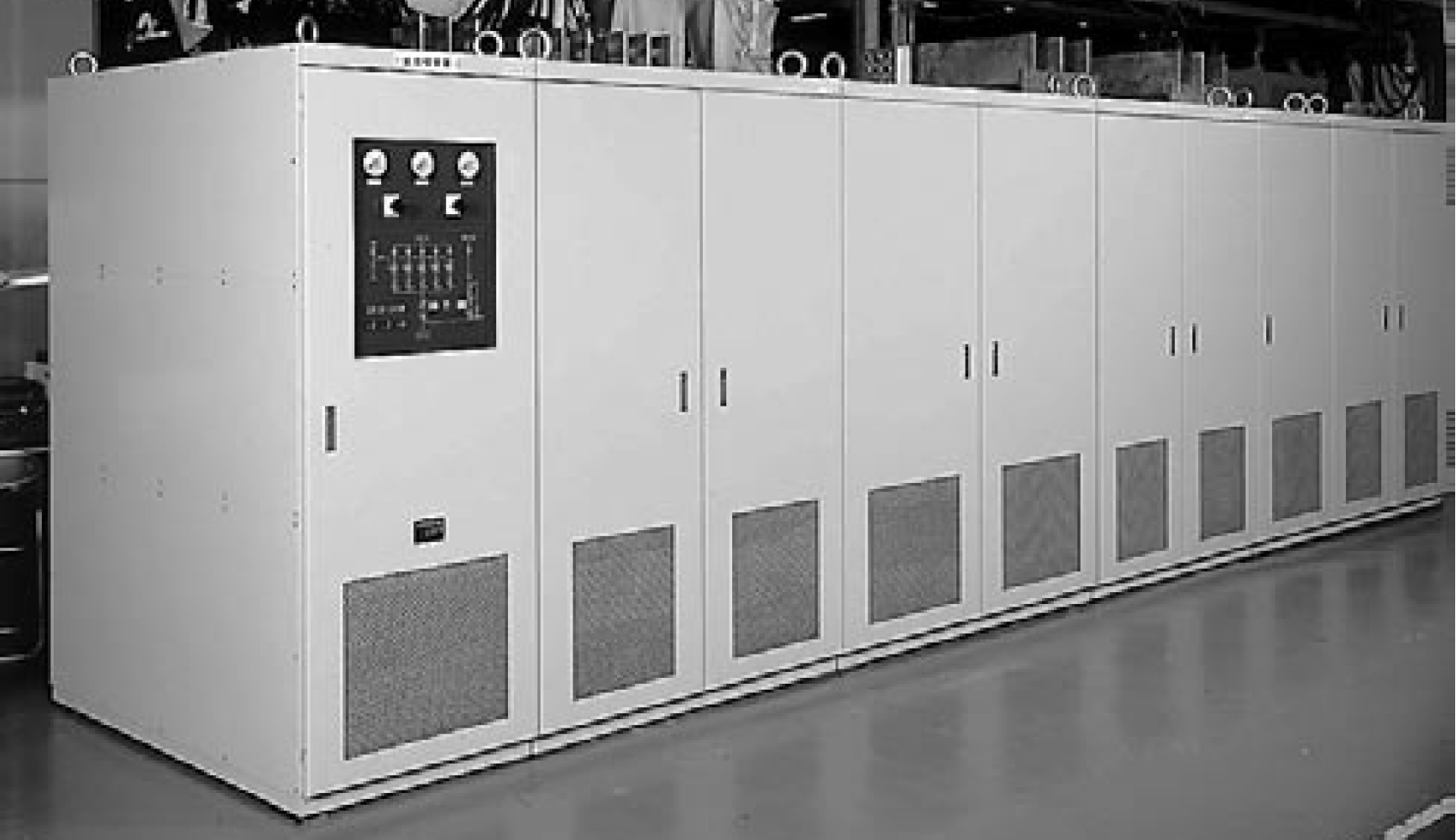 The 1980s was the era in which the industrial world first began rushing towards an information society. Around that time, Nippon Telegraph and Telephone Public Corporation (NTTPC) started bringing in uninterruptible power supply systems (UPS) to improve the reliability of the increasingly essential communications and data. In those days, NTTPC was a significant user of domestic UPS, and it participated in the development of UPS while also working on cultivating the market.

The Japanese government privatized NTT, and in 1985, it was renamed Nippon Telegraph and Telephone Corporation (NTT). Just then, the GATT (General Agreement on Tariffs and Trade, now part of the WTO) Tokyo round encouraged the expansion of free trade. To accomplish this, it became necessary to expand the opportunities for domestic and foreign manufacturers to enter the market for material procurement for NTT as a part of government procurement. Massive capacity UPS were covered under the power supply field.

In 1984, prominent manufacturers, both domestic and foreign, began participating in the market with international procurement articles, and it became a battle of technology, service, and price. As a result, only Sanyo Denki and another domestic manufacturer, a new participant in the market, remained. Despite the opening of the doors, foreign corporations did not enter the market.

UPS are systems that can maintain AC output even during power outages or voltage dips in the commercial power by providing electrical power from a battery. These large capacity UPS were high-reliability uninterruptible power supplies that used modules with a single unit output capacity of 200 to 500 kVA and realized redundant parallel operations with 3 to 5 units (including reserves) for a total output capacity of 400 to 1500 kVA.

Sanyo Denki proposed devices that were half as small and half the cost as conventional devices based on a new UPS series that used remarkably advanced semiconductor power elements, IC chips, and microcomputers. Furthermore, based on knowledge accumulated over the years, Sanyo Denki realized improved reliability and a failure diagnosis function through noncontact design with the large power supply parts. While other companies mainly used transistors as the inverter power element that acts as the heart of the UPS, Sanyo Denki and the other domestic manufacturer who outlasted the competition both used GTO thyristors, giving both companies a price that beat out the competition with a narrow margin between the two.

The proposed product included many new developments that expand upon fundamental technology, and also, immense technology and power were required from developments to meet customer specifications. Over ten engineers worked about ten months on this project, and in December 1985, the first device was safely delivered.

Of particular interest, the technology did not include a commutation circuit (a function to turn the thyristor off), and it had an inverter from the large overload capacity GTO thyristor, a completely noncontact without momentary power break device for commercial power exceeding 2000A, and a failure diagnosis function that saved and maintained each type of waveform during a failure. The lack of commutation circuit made the device high efficiency, low noise, and small size, while the saved waveforms during failure helped following procedures to ascertain the failure.

While conventional maximum capacity devices had prices exceeding 200 million yen, the price of the new machine was about half of that, allowing Sanyo Denki to show profits right away. A significant factor in the low price was the material costs where we were freed from high priced authorized products and could freely choose each of the over 10,000 parts. Especially for the GTO thyristor, which constituted a large portion of the costs, Sanyo Denki was able to make policy purchases of the 600A-1400V products used for vehicles at a price based on our budget.

With the privatization of NTTPC, the “KM movement” from a public company with in-house developments to a private company produced a significant effect on processing costs. Technological improvements and elimination of waste reduced the number of processes, and the rates were reworked from the high rates for a public company to the competitive rates for private companies.

NTTPC was the largest customer of the power supply business at the time, and the private demand for large capacity UPS, procured internationally due to an opening of the market, added great significance to the Sanyo Denki product. It later encouraged the power supply business, and the UPS became the foundation product for delivering confidence and great strides in progress for a long time after. For about 20 years, a total of nearly 100 systems, including revised versions, have been delivered, making significant contributions through sales that exceed 10 billion yen.