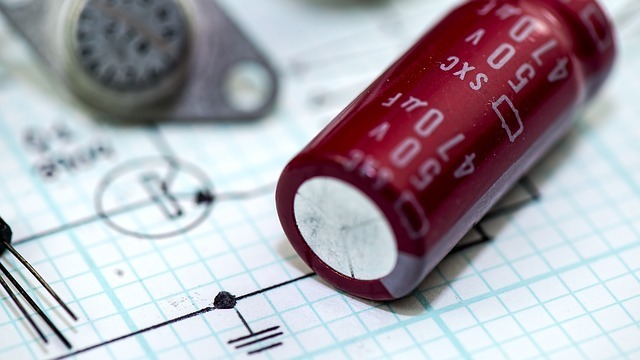 The AC power conversion technology of UPS and electric power conditioner is called a static type that uses the semiconductor, and the engine generator is called a rotation type.

This page classifies the electric power conversion technology of the static type into the primary circuit and the control circuit, etc. and introduces the technology that changes the trend about UPS.

The thyristor does not have the self-arc-interruption ability. Therefore, the arc-interruption circuit where the thyristor is interrupted with an external circuit is necessary. In addition, multiple methods were adopted in the DC/AC conversion because it was not able to raise the switching frequency.

Fig.1 shows an example of the electric power conversion circuit that uses thyristor.

The arc-interruption circuit becomes unnecessary in an electric power conversion circuit, and external size has become small rapidly by putting GTO with the self-arc-interruption ability to practical use. However, the switching frequency could not be enlarged, and the conversion method did not change from the multiple methods. It resulted in no improvement on the characteristic side.

Here, a significant improvement on the characteristic side was seen.

IGBT is an electric semiconductor that improves the switching performance by one digit or more compared with the transistor and is the latest element today.

The conversion frequency of PWM can be raised by the great improvement of switching performance. As a result, the AC filter that smoothes the waveforms of PWM becomes small, and it is compact in size and economical. In addition, the switching frequency increased higher than the audio frequency of man, helping to reduce the noise.

2.5 The Future of Main Circuit Technology And Electric Semiconductor

SiC has a large insulation destruction electric field and thermal conductivity. By making the best use of this characteristic, the semiconductor element of low loss that operates at a high temperature can be realized. If this semiconductor is put to practical use, the efficiency of the power conversion circuit improves significantly. Also, the cooling structure becomes small, and the miniaturization of the device becomes possible.

Moreover, as the switching speed of the semiconductor rises, the noise emission level increases. As for the primary circuit technology in the future, a technology that suppresses the noise economically is required along with the advancement of the electric semiconductor.

By using MPU, more complex operations become possible. MPU also makes it easy to change process by the usage of the device.

The DSP (digital signal processor) changed the trend greatly in accordance with the development of the device used. By putting digital control in the DSP instead of the analog control, the number of parts has decreased. It became compact in size and economical and it also improved in reliability.

MPU, which enables high-speed operation, has been put on the market as a device. As the trend, by using MPU, it makes it possible to include the sequence control in clause 3.1 and the PWM control into one device, and it promotes further miniaturization and being economical.

The development of the control circuit itself is another. Specifically, various technologies are proposed in the control technology of the parallel operation of the DC/AC conversion circuit. Our company developed our original, individual control method that may change the trend greatly. This control method is introduced in the following text.

One longtime issue was how to reduce the common control part in the parallel operation of the output of the DC/AC conversion circuit. In general, through sensing the cross-flow when operating in parallel, valid and invalid elements of this cross-flow were extracted, and the phase and amplitude control of the output AC waveform was performed. However, because this circuit was complicated, the complex adjustment was required to stabilize the control.

When two voltage sources are connected in parallel through resistance, the current between the voltage sources is suppressed by resistance and balance. It is our original, individual parallel control to discover the technology that gives an equal effect by the control as this resistance nature and to enable the parallel operation easily. With this technology, the cross-flow and its elements do not have to be extracted anymore. It only requires its own output current to be taken into the control and any complex circuit is not needed, and the parallel control became independent.

Please refer to “Analysis of the parallel operation of UPS that considers the influence of the line resistance,” in our No.10 Technical Report for details.

In general, it is a double-conversion system where two conversion circuits of CONV that converts from AC into DC and INV that converts DC into AC are used. And UPS that usually supplies the power by INV is the main current.

In recent years, a lot of technologies that make the best use of the advantage of the INV UPS and the commercial UPS of the double-conversion system have been developed, and the selection range for users has been extended.

Moreover, new technology has been developed regarding the high-reliability of UPS where the parallel redundant system or the universal spare system in general.

The following section introduces the technology that changes the trend of UPS.

Fig.4 shows the block chart of the primary circuit.

Our company produces the mid-scale model of 20kVA to 200kVA. Please refer to “Development of Mid-scale UPS ’SANUPS E’” in our No.14 Technical Report for details.

In this method, only the current that flows to a common circuit is the harmonic current of the load when the phase of the input voltage and the output voltage meet, and the current that flows to the semiconductor element decreases. Moreover, the voltage of DC can be set low, and the switching loss of the semiconductor element can be suppressed. By these two effects, efficiency rose greatly compared with the general continuous INV power supply UPS.

It is called three-arm system for the I/O single phase. Fig.5 shows the circuit of the single-phase 3-arm system.

Our company produces a 1kVA single phase I/O model. Please refer to “Development of small-scale UPS ‘SANUPS ASE’” in our No.12 Technical Report for details.

This document introduced the technology that changes the trend in each part, but the power system technology is polysemous, and only one example was introduced here.

The technological progress quickens every year and the change in the trend of the power system technology is not an exception. Continuous efforts will be made to develop leading technology while reading the trend ahead.