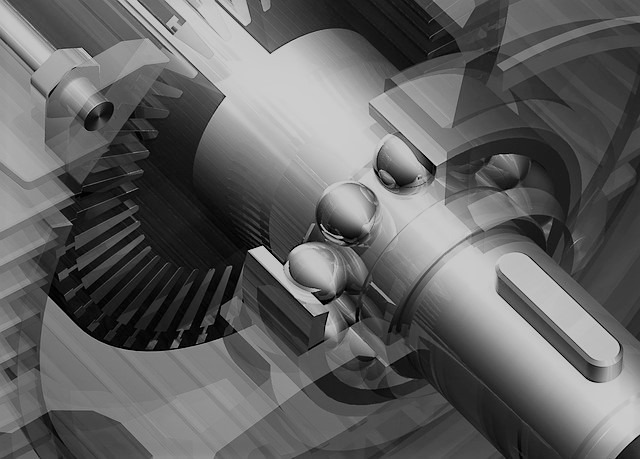 In the history of computers, the computers from the late 1960s to the 1970s (known as the third generation of computers) used IC and LSI and achieved rapid progress through electronics. At the same time, to avoid damage to logical elements and other components due to sudden power voltage fluctuations or penetration of lightning surges, the power supplies needed methods to insulate them from the commercial power supply lines completely. IBM of America (hereafter known as IBM) used a 400 Hz output motor-generator set (henceforth known as MG) to achieve this. Sanyo Denki supplied IBM of Japan (hereafter known as J-IBM) with 11 kW MG from the beginning of the 1970s, and then 16 kW MG from 1977.

For the fourth generation of computers (from the second half of the 1970s onward), IBM announced a new computer that was the first to use VLSI. The computer realized astoundingly high performance, with astronomically increased storage capacity and significantly improved operation speed. With demands for reliable power supply growing even higher as a result, in 1981, Sanyo Denki received an order form IBM for four mass production prototypes of a 32 kW MG. At this time, the rival companies in America had already started mass production and delivered products to IBM, but IBM decided to assess the Sanyo Denki product based on the achievements of the previous MG and 160,000 stepping motors provided from Sanyo Denki.

This 32 kW MG was ultimately incorporated into the sound absorbing box (made by IBM) that realized low noise equivalent to office equipment, making it a great feature that allowed it to be installed in offices.

Beyond the ratings and specifications of major requested items for prototypes (Table 1), there were many other detailed requests, but the following were paid particular attention and designed only after repeated consideration.

• Ventilation structure to suppress the acoustic noise of low-frequency ranges, which are difficult to reduce

In November 1982 after delivery, during the final stage of assessments from IBM Poughkeepsie Lab, there was information that when performing no-load operations and stopping approximately every 40 minutes, after the input power turned off during freerun speed reduction, an abnormal noise occurred. Thinking that there might be a malfunction, I was immediately dispatched to the lab to perform an investigation. As a result, we confirmed that the noise was a result of an acoustic echo due to resonance when the ball bearing maintained close to 1,400 rpm for approximately 10 seconds once during the time from full speed to stopped.

This resonance phenomenon occurred for a short time, and due to the oscillation energy level being low and other various reasons, there was no concern about the ball bearing damaging other parts. After understanding that this was normal behavior, the lab continued assessment, and the prototypes safely finished testing with a passing grade.

Early in the following year, Sanyo Denki received the order for the first mass production lot. It continued to the second and third lot, and with additional orders from J-IBM, this became a massive deal. The related departments at Sanyo Denki pulled together and put all of their energy into establishing the mass production system, maintaining quality, and ensuring timely delivery. As a result, the orders were delivered well, and throughout almost ten years, this happily resulted in mass production orders and distribution of over 10,000 units.

Thankfully, there were no malfunctions or in-field complaints regarding the delivered products. The fact that so many products, running for long periods across the world, could safely fulfill their purpose is proof that Sanyo Denki achieved the most important goal and positioning of IBM: “realization of high reliability.” For us, we were thrilled that we could obtain confidence and high assessment from customers and that we could contribute ever so slightly to the technological development of computers, facts which gave us confidence and pride.